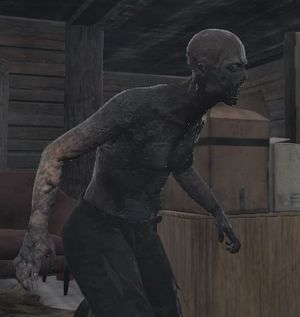 The Runners are found in buildings and during the Mist.

They are the most common Infected.

They are fast and hit hard, causing possible bleeding and wounds to the player.

They can not hear Bows although if there is a gun shot, they will become alerted and charge at the player

They can not leave their house or area where they spawn in the day, although they're able to come out at night or during the Mist.

As of update 0.3.9 The Berserker is only found inside The Oldmine.

The Berserker is currently the only boss found in the game which when killed, the player will get access to higher tier ores found beyond the Berserkers lair.

To kill the Berserker you will need explosives which does the most damage as well a lot of fire power.

The Berserker has a health bar which when attacking normally, the bottom bar will go up as the player attacks. When that bar is full, the Berserker will stop as to rest which will allow the player to attack and deal damage to the Main health bar. Take caution as Runners will spawn briefly.

When killed, the Berserker drops a random amount of Military Component Box and Grenade Fragment as well drops a Blueprint.

An unknown type of infected referred to as "Tank".

These have not yet been added to the game.