Drivable Vehicles are used to cover long distances around the map but also are a means of storage from the 25 slots for loot, equipment or components. Vehicles are found on roads and near buildings as being red, with a white symbol floating above it, although when they are found they will have no parts or fuel. Currently Vehicles can NOT be destroyed although this feature is currently for 'static cars'. Static vehicles are vehicles which can't be driven and can't be looted but can be destroyed with an axe. When destroyed the car could drop scrap, scrap wood and components as well has a chance to drop a spark plug. 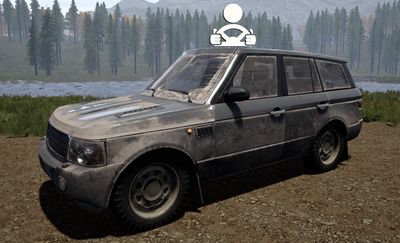 To get a car working you will need a Car Engine, Car Battery, Spark plug and Four Tires as well as fuel. Parts and fuel are usually found in other Vehicles, Garages or Gas stations. Garages and Gas stations usually can contain Car Engines, Car Battery’s or Spark plugs with high durability while Vehicles contain fuel but have fairly low durability on parts found. Fuel varies in quantity with the location, as such cars near Bandit bases or buildings will usually have between 2 - 5 Litres of fuel, while cars on the roads can have between 0 - 2 Litres. Fuel can be extracted by use of a Gas Can.

Loot inside loot-able cars are random, from usually containing some food although weapons and tool also can be found inside. Most of the time materials are the main consistent thing found, such as scrap and other components. 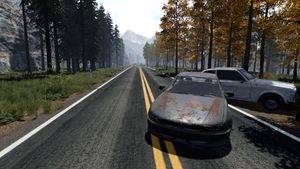